There was a problem in the chook shed. Too many blokes. Only 1 could stay – but what to do with the rest?

We asked around town. ‘Put a sign up in IGA’ said Dave, ‘just don’t use the headline “Free Cock” like I did. ( His sign mysteriously disappeared).

‘No-one will want them’ said others. ‘They’ll just end up in the pot or thrown to the foxes’.

We ummed and ahhed for weeks, enduring the blast of 3 roosters at dawn and winning no favours with our neighbours. Gary next door has gone a bit weird. I think this might be why.

‘They have to go,’ I finally said to Leo. He nodded and looked at the mountain for a moment before replying. ‘I’ll do it.’

Leo is a country boy at heart. He was born in a small town north of Rio de Janeiro where milk trucks are still drawn by horses. Almost every house has chickens who spend their days strutting around mangy dogs asleep in the sun. Leo’s lived in cities a long time though. But as I now know, dealing with roosters isn’t something you easily forget.

As luck (not for the chooks) would have it, Camila, his sister, was visiting for the weekend. Her eyes lit up when we told her. ‘I’m in’ she said. ‘We’ll cook up a feast’. It was decided.

It was time for Shroom-boom and Fatty to go 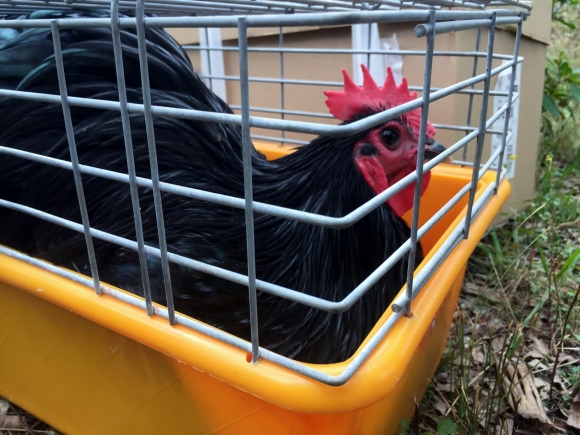 The Brazilians swung into action. A fire was lit (for the plucking part), the biggest pot pulled from the pantry, and a knife sharpened. Our initial plan was to keep the kids away but they wouldn’t hear of it. The adults concurred: knowing where your food comes from is important. I felt uneasy but death is everywhere in the country. Driving to the next town involves veering around numerous carcasses. And the boys do love eating chicken… 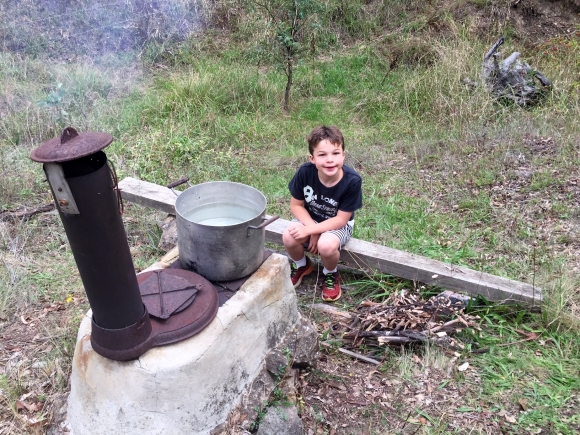 The first rooster was calm 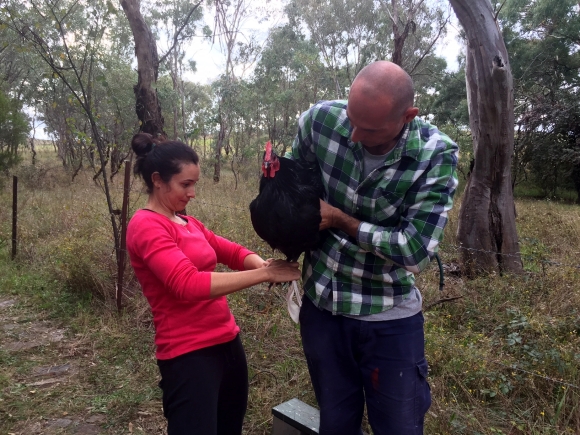 It was over pretty quickly though. Camila patted them and made soothing sounds as they left us. It took a few minutes.

Their feathers were the prettiest green

Once dead (and trust me they were) they had to be dipped into the boiling pot to loosen the feathers for plucking which was a lot of hard work. Camila was totally in control. 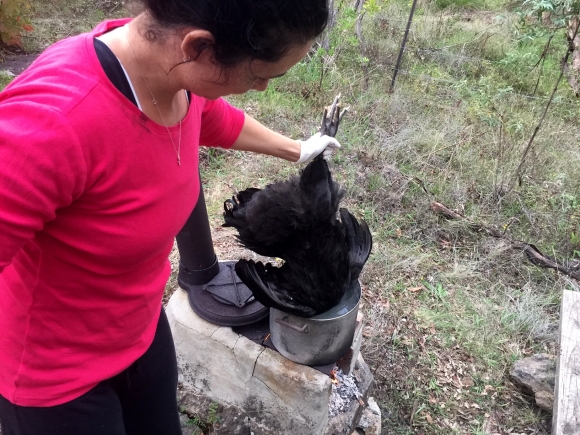 I dashed ahead home to prepare the vegetables. As the sun began to set, the stove warmed up.

The cooking part was a team effort. We poured cold beers and congratulated ourselves on getting this far.

The aroma of simmering chicken with red wine, garlic and herbs filled our kitchen

So there you go. We killed our own food. It was a strange experience and I still feel a little sad about having to dispose of our handsome feathered boys, but we all learned a lot and were lucky enough to climb into warm beds with full tummies.

I feel a little tougher and I guess, a little more connected to how many people around the world live.

Not having other people sanitise your food before you eat it made me appreciate this meal in a way I never have before. Which is saying something, considering how regularly I eat.

It felt important to do this. I’m not in a hurry to do it again but I’m pleased we saw it through and hey, this never happened in Bondi. And Gary just left me some chicken scraps on the fence. I guess he’s a little changed too.

Betty Buttercake used to party likes it's 1999 (it was). Now she meditates whenever she can, loves collecting kindling for the fire and tries to keep it real and nice.

One reply on “We crossed a line”

I love reading your family updates 🙂 and I miss chatting with you like all those years ago. Thanks for sharing your little part of the world. Much love 🙂 Bron xo

When the change of life inspires a life of change

Betty Buttercake is a lifestyle blog project work-in-progress. Expect little. Be kind. I might even send you a fresh chicken egg one day.